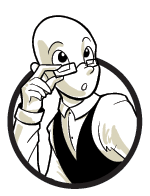 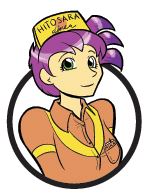 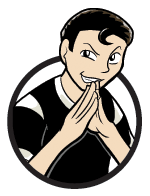 A time-bending adventure featuring a hapless clockmaker who embarks on a mission to right wrongs on distant worlds. In his first (and only) outing, Simon travels to a planet forced into a perpetual stone age by a power-mad baron in control of a giant hourglass.

Mika's first day as a waitress quickly becomes a series of madcap hijinks, leading to a showdown between two competing restaurants. It's a workplace comedy about loyalty, teamwork, and how not to run a diner.

In this shameless anti-biographical webcomic, "Evil" Jim is a college student who schemes to take over the world. Each attempt to gain more influence over his surroundings propels him toward megalomania, melodrama, and catastrophic devastation. You know, comedy.